It was dark in Paradiso in early August 1989. The light of computer screens created a blue fluorescent mood. Off to the right-hand side, in the middle of the floor of the main hall, we had built ’the cockpit’, a collection of all kinds of computers, which would be able to facilitate all the connections we were planning. It was lit by one light bulb which was hanging down from the high ceiling of the former church Paradiso. Above the stage there was a screen, to show ‘connections’ live.

2 AUGUST: TO BYTE OR NOT TO BYTE

The first day was “To byte or not to byte”, about the relationship between man and machine . An animation of Max Headroom opened the conference, after which Captain Crunch opened the network links with other nodes in the USA, Germany, New Zealand, and France. But soon after Crunch started chatting away, the Paradiso network that had been created especially for the occasion, was hacked and went down. After an hour or so, it was up again and stayed ‘up’ for all three days, even though it was often reported to be slow, since there were only four outgoing telephone lines, which had to take care of all the traffic. Later Crunch also used a videophone to connect to the Russians, who were waving the famous ‘Hi’ to establish the fact that the connection worked. I will discuss this connection later in the reflections.

While the network was down, Lee Felsenstein gave his keynote speech about the computer as a tool for democracy, emphasizing the quality networks can provide for local communities. In the early afternoon Captain Crunch opened a videophone link with the USSR, which will be discussed in one of the reflections later. We saw Russians on the screen waving at us. In the afternoon several alternative networks were demonstrated. Michael Polman from Antenna demonstrated and spoke about the fact that networks ultimately remain people-to-people networks which have to be orchestrated as well. Jeremy Mortimer of Greennet demonstrated Greennet, Peacenet and Econet and emphasized that computers are sometimes the only way to export reliable information from certain countries that are in trouble like South Africa, Nicaragua and China. Tjebbe van Tijen showed the university network and the sysop from the radical political BBS de Zwarte Ster from Rotterdam, Xythar showed the way politically sensitive information and political discussions take place on their system run completely by volunteers. Lee Felsenstein demonstrated the ‘community memory’ project in which people can leave messages for other people in their own neighbourhood. This was the first time I realised that mediated presence could be appreciated when people are actually sharing their natural presence by also being in the same place at the same time.

At the GHP we succeeded in making links with Moscow because Captain Crunch was already their friend; we did succeed in connecting to South Africa and Brazil because the people there were in the network of Michael Polman’s Antenna; we were connected to New Zealand because of Hack-Tic; and to Nairobi, where Professor Hamelink was teaching at the time.

When reviewing this case study as a key-informant, Patrice Riemens contributed the following memory, which highlights the conveying of trust through people connecting with people. While travelling in the spring of 1989, Patrice Riemens met a woman activist, Nighat Said Khan, in Pakistan. When he explained to her what we were about to do, she emphasized he should contact John Sayer in Hong Kong. John Sayer, who is part of the INDOC network, had just been to Rome where he met Michael Polman. When Sayer heard what we were about to do from Patrice, he emphasized that we should contact Michael Polman, who runs the Antenna Foundation and lives in Nijmegen, 100 kilometres from Amsterdam. Polman had been on our mailing list from the beginning, but we had not identified him as a possible collaborator. Michael Polman had seen our mails, but he had treated them as mere information and not as possible collaboration. Through connecting people with people, who had met each other in natural presence, a certain trustworthiness was conveyed and collaboration could start. Patrice Riemens and Rop Gonggrijp have worked with Michael Polman for many years and this may not have happened had it not been for meeting Nighat Said Khan in Pakistan.

Once the programme had been drawn up, we had to reach out for our audience. It is a question of finding the right tone in the right places. The imagery (Max Kisman made the poster in which you see a dark blue universe with a black axe drifting through space), the language used, and the indirect connections, define how one can connect to existing networks. We had visited the Chaos Computer Club in Hamburg and were already collaborating with them, but we needed to approach other Dutch, American, European and global networks to let them know about this event. At the time there was Peacenet, Greennet, Geonet, a Dutch NGO Antenna, the BBS ‘De Zwarte Ster’ and there was HCC-net, the hobby computer club. But who was in France? So we went to Paris and met people from the magazine Terminal and UNESCO got them involved. Lee Felsenstein, one of the guests, announced the event on the Well in the USA. When creating an event one is also creating the audience. To create both the audience and the programme one needs ambassadors, one needs real connections, one needs bridges of trust, one needs ‘social’ interfaces. When we were online with the audience on the big screen, it was the perceivable relation between Crunch and the Russians that made the connection ‘real’. This effect of the social interface was not intended at the time. It was just ‘handy’ if the person who knew the network could also demonstrate it and tell a bit about it. When people in the connected places recognised the people they knew and showed this, what happened became a true fact. It was in these moments that the effect of the social interface surfaced. When Michael said ‘Hi Andy’, or Captain Crunch said ‘so what’s up Sergei’, we believed these connections were real.

Caroline Nevejan founded with Marleen Stikker de Waag and is currently Professor Designing Urban Experience at the University of Amsterdam. She described this event in detail in a chapter of her dissertation. 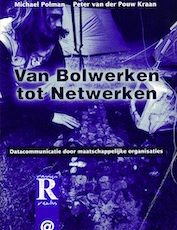